Described below is a brief history and review of the Dodge A100 nameplate.  This is a synopsis of various sources including Wikipedia, Hemmings and Allpar.  This outline is designed to be general in nature.  For more detailed information check out our Features and Specifications page. 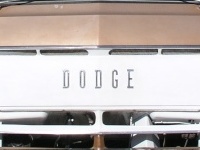 The Dodge A100 was made by Chrysler Corporation for model years 1964, 1965, 1966, 1967, 1968, 1969 and 1970. The A100 featured two distinct body styles including 3 & 5 window pickup trucks and various vans.  Over its production run the A100 Van was made available as a cargo “panel” van, Sportsman (rear window) passenger van and side door van along with various camper configurations.  At the time of production nearly 70% were vans.  At one point in time the pickup was more popular among potential restorers and enthusiasts however today there is even demand among the body styles.

During its production run, the A100 competed with the pickup and truck versions of the Ford Econoline, Chevy/GMC C-Series (Chevrolet Corvair Greenbrier/ GMC Handi-Van & Rampside Pickup) along with the German Volkswagen Type 2 VW Bus.  The one major feature all of these vehicles had in common was a cab over, flat nose mid-engine design.

Volkswagen was the first to bring this to the United States in the 1950s with Ford and Chevy to copy it for release in 1961.  Dodge was late to the market with an initial 1964 release but with a lower base MSRP ($2,062 – 13% less than Ford) and bigger, better features performed well with both consumers and critics.  Influential publications of the time including Popular Science praised the A100 for its handling, ride, superior hauling capacity and power output.

The A100 was available with Slant 6 motors as well as more powerful 273 V8s first introduced in 1965.  Three speed manual and auto transmission were available.  The Dodge A100 had the same wheelbase as the Ford Econoline however was longer, wider and taller.  The A100 also featured more cargo space, great gross vehicle weight and better payload.  To learn more about specific engines and dimensions check out our Features & Specifications page.

The A100 was available in both a short and long wheel base “A108” with the longer version popular among camper conversion companies.  The longer wheel base version was not introduced until 1967 and many of the professional produced camper options such as the Travco Family Wagon and Xplorer 21 were not made available until 1969. 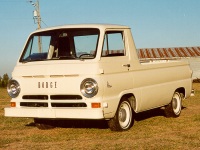 The Dodge A100 Pickup was Dodge’s first entry into the compact truck market segment.  It was made available in both a three (3) and five (5) window option.  The five window option was basically the three window with two extra quarter windows on the B pillar.  In 1964 at least 3,194 pickups were made with a base price under $2k.

The main selling point with these pickups was the wealth of storage space.  The mid engine flat nose design allowed for the driver and passenger to be very close to the front bumper.  The engine was place in a compartment between the seats.  This design allowed for not only a 7ft Long X > 5.5ft Wide X 2ft Deep cargo box but also storage space in the cab behind the seats.

The pickup is mechanically identical to the van version including the forward control design and even the A108 extended wheel base option.  The obvious difference with the pickup body was that behind the two doors was a flatbed. This design was similar to the Ford Econoline Pickup.  It is not uncommon to see A100 pickups outfitted with a camper shell and other utility features for the bed.  One of the most popular and Iconic Dodge A100 Pickups was the Little Red Wagon detailed below.

A 426 hemi dropped Dodge A100 pickup with many other custom features and modifications was popular starting in the 1960s through the early 2000s as a drag strip draw. This red colored A100 dubbed the “Little Red Wagon” was driven by Bill “Maverick” Golden and known for wheelstanding, which is pulling a wheelie with a four-wheeled vehicle.  Bill actually was the first to “wheelstand” with his Little Red Wagon Dodge A100 Pickup.

Check out some videos of the Little Red Wagon running a drag strip on YouTube or read this article on Allpar for more of the back story.

The Dodge A100 Van and Wagon were popular during their production run along with retro enthuasists today for many reasons.  Cheif among them however being the van’s extreme versatility and power/capacity to weight ratio.  The A100 panel van / sportsman wagon was the same weight as Chevy’s Corvair and lighter than the Ford Econoline however could still seat up to 9 passengers or provide 213 cu in of cargo space.  The VW Bus couldn’t even come close to this capacity.

The A100 Van was popular during its production as a base model for camper van conversions by 3rd party companies and other utility vehicles such as ambulances. Today A100 vans are still popular for retro class B motorhome builds.  During the first few years of production the van was similar to the pickup in drivetrain changes and inclusions.  Interior features such as bucket seats helped to position the A100 in front of competitors. 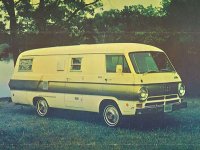 In 1967 the longer wheel base A108 version was introduced.  This is also around the time when various “Job-Mated” interiors were made available for tradesman.  At least 18 different packages were created including custom interiors for everything from electricians to locksmiths to plumbers and general contractors.

1968, 1969 and 1970 would see many changes to the van and options from third party camper van makers.  This included the very rare and sought after Travco Family Wagon and Xplorer 21 campers.  Pop-top options were made available by 3rd parties in various configurations.

Power steering with an automatic transmission was also included which was one of the first vans to do it.  Larger more powerful Slant Six engines were also made available along with a fully synchronized manual transmission for the 318 V8.

The final year for the Dodge A100 nameplate was 1970 with fewer than 20K made during this production year.  Dodge made roughly 30K-40K vans and pickups per year during the production run years (1965-1968)  An estimated 107,779 vans made in total however it is hard to know for sure because after the initial production year Chrysler only made sales breakdowns available by wheelbase and engine.

Despite or perhaps because of the short production run, the Dodge A100 nameplate and the ford control style pickup/van have remained popular among enthusiasts, restorers and DIY weekend warriors.  Perhaps its due to the VW Bus iconography, but the early model Ford Econoline and Dodge A100 vehicles remain popular today.

In more modern pop culture the A100 has been featured on the popular car restoration show Overhaulin and on the smash hit That 70’s Show.  The A100 has also appeared in the movies Cars, The Texas Chainsaw Massacre (2003) and Stealing Harvard.

Have anything to add?  Let us know in the comments section below.

If you have found this site useful as a buyer, seller or general enthusiast; please consider donating to help us fund the further development.

CLICK HERE for our most recent listings which includes Dodge A100s posted directly to this site along with ones listed on Craigslist and eBay. If you want to narrow your results you can use the search box above for custom features such as "A108" or one of the links below to go directly to a specific A100 model year or body style.

If you are looking to list a Dodge A100 Pickup, Van or Camper on our site use the link below.

Van Pickup Camper
Click on the United States or Canada links below to see all current listings by country sorted by most recent. You can also narrow your search to specific A100 location by clicking on one of the states/provinces or cities/areas.