Outlined below is the text and scanned image of a letter from DaimlerChrysler Corporation Historical Collection.  It is from Bruce Thomas a corporate historian to a man named Nathan Breece.  The letter written in 2004 outlines the historical impact of the Dodge A100 not only to Chrysler but also to the compact truck and van market as a whole.  It also offers a behind the scenes look at the development and engineering of the A100.

The 1964-1970 A100 compact van, wagon and pickup are perhaps more historically significant than most people realize.

The 1964 Dodge A100 when introduced, had more options, more power and most importantly had durability, particularly from a structural standpoint than the competition and literally took the market by storm.  This was not accidental and Dodge Truck production and market share increased substantially.

It was very fortunate that the A100 was so well received because Chrysler management had decreed in the early 1960’s that if Dodge Truck did not improve sales and production the Corporation would drop out of the truck market entirely.

In 1961 the entire truck Division was put on maintenance of product program wherein no new models were planned.  The only work was on field complaints on existing products.  Exploratory work did occur on possible new products and the compact truck market was studied.  It looked like a winner if the right product was offered and preliminary work on the A100 commenced.  Durability testing of the existing compacts at the Chrysler Proving Grounds at Chelsea, Michigan uncovered serious durability and performance problems on all the vehicles tested.  After serious debates at a high level it was decided that if Dodge went ahead with the program the structural durability problems and performance problems would be solved even if major costs were incurred.

The decision to proceed was made and the durability and performance levels of previous Dodge Trucks adhered to with a superior vehicle being put on the market for the 1964 model year.  It is interesting to note that the pickup version never achieved the success of the vans and wagons and was dropped when the B van and wagons debuted in 1970.

During the A100 production run Dodge kept offering new options, usually before the completion.  Such items as power steering, automatic transmissions, V8’s, air conditioning, longer wheel base, etc., and kept Dodge the major player in the compact van and wagon sector.

The Walter P. Chrysler Museum usually features an A100 van as part of the Dodge Truck disaply.

Hope this helps answer your questions.

Displayed below is a scanned copy of the letter 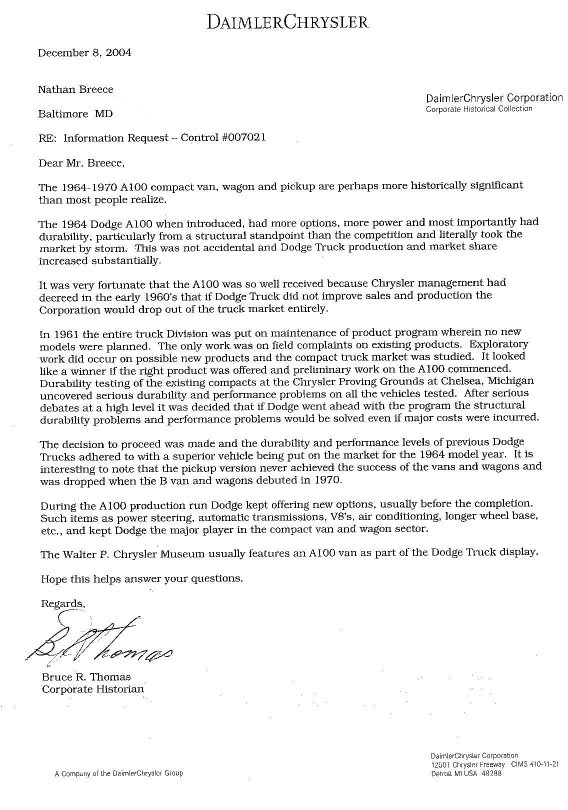 Let us know what you think about this letter below…

If you have found this site useful as a buyer, seller or general enthusiast; please consider donating to help us fund the further development.

CLICK HERE for our most recent listings which includes Dodge A100s posted directly to this site along with ones listed on Craigslist and eBay. If you want to narrow your results you can use the search box above for custom features such as "A108" or one of the links below to go directly to a specific A100 model year or body style.

If you are looking to list a Dodge A100 Pickup, Van or Camper on our site use the link below.

Van Pickup Camper
Click on the United States or Canada links below to see all current listings by country sorted by most recent. You can also narrow your search to specific A100 location by clicking on one of the states/provinces or cities/areas.